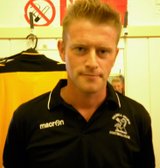 Holwell made it two wins in a row on Saturday when they comfortably dealt with new league opponents Birstall United.

With some of the experienced players returning after holidays Manager Webster was still not able to field his strongest side as Ridout, Chapman and Fontoura were unavailable and striker Mark Tindsley failed a medical before the match.

Conditions were not right for silky, slick football and both teams struggled to get to grips with the very blustery conditions making the early exchanges frenetic and scrappy.

Holwell looked the more dangerous from the start and newly promoted Birstall found it hard to deal with the running of Wells, Hazeldine and Harris. Hazeldine had a chance on 12mins as Reeves sent in a cross from the right but he just couldn’t control the ball to get a shot away.

Birstall were giving away too many free kicks in their own half and with the wind in Holwell’s favour the visitor’s back four were under severe pressure as Cropper sent in a couple of searching free kicks but the wind made it hard to control the ball. Holwell continued to press as Wells and Hazeldine fashioned a chance for Hibbitt on the edge of the box but his shot sailed over the bar.

On 21mins another free kick awarded to Holwell on the right 30yards out. Cropper shaped to take the kick with an in swinger and it took a good low down save by keeper Shilliam to stop the ball from curving in over the defensive wall.

Birstall had a rare shot at goal as they started to get a bit of a hold of the game as Joinson failed to connect with a smart pass from Lewis Dodd.

But on 29mins the home side were in front Bitmead broke up a promising attack for the visitors near the half way line and set Graham Wells away into the box. Defenders thought Hazeldine who was offside made an attempt to play the ball but referee Hewins let Wells continue and he worked his way along the bye line finally presenting Hazeldine with a tap in to put Holwell in front.

Within a minute Holwell were cruising as Michael Stevenson won the ball in midfield and sent Graham Wells through he calmly beat the advancing keeper to put the home side 2-0 up.

Birstall did fashion a bit of a fight back but Bitmead and Kibble at the back had the measure of any attacks though the home side were kept on their toes as Lewis Dodd fired a shot over on 34mins.

Cropper sent in another teasing free kick on 35mins after Wells was fouled again the kick coming right through to Bitmead at the back post but his header went just wide of the post.

Carlton Cropper migyt have felkt himself a tad fortunate to stay on the pitch a moment later when he escaped with a yellow card for a lunging tackle on Dodd (which some refs may have deemed a two footed tackle with both feet off the ground).

Holwell continued to dominate to the end of the half but right on half time Lewis Dodd nearly got the visitors back into the game as his shot from the far edge of the eighteen yard box crashed back off Witham’s right hand post.

As could be expected Birstall started the second half strongly to get back into the match and for the first five minutes put pressure on the home side as Witham had to make two quickfire saves to keep the score 2-0. Birstall were on top now but misfiring as Young missed from close range.

However it didn’t take Holwell long to weather the storm as Michael Stevenson put the home side further ahead with an audacious back header which bewildered the visitors’ keeper, from yet another Cropper free kick on 55mins.

Birstall threw on all subs in an effort to get something out of the game but the match was beyond them now and their play disintegrated.
Foster replaced Hazeldine and combined well with Harris as Holwell turned up the tempo in the last twenty minutes. Holwell’s dominance was such that Foster could have had a hat trick before the end of the match but he did get just rewards for his effort on 84mins, put through by the outstanding Michael Stevenson, he easily slipped the ball past keeper Shilliam to add a gloss to a good home performance by Holwell.